Flavor
Tart at first. After time, it becomes sweet & juicy. 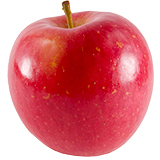 Facts of Interest
Paula Red apples are bright red with some yellow and tan spots; the skin often has a dusty sheen. They have a sprightly taste, not too sweet and not too tart, vinous and slightly reminiscent of strawberries. It has a firm white flesh that becomes soft and mealy extremely quickly as its season declines. Paula Red apples are suitable for both eating fresh and cooking, although they become extremely soft when cooked, which suits them to some dishes (applesauce) and not others (pies). Don’t miss this late summer apple! Available only into October. Pleasingly tart flavor and good aroma. Great in back-to-school lunches, or early season baking. Paula Red apples were discovered around 1960 by grower Lewis Arends near a McIntosh block in his orchard in Sparta Township, Kent County, Michigan. He named the apple after his wife, Pauline. Paula Reds appeared on the market as a distinct cultivar in 1968.